In July 2015 our friend and comrade got arrested at a passport control at the Greek-Bulgarian border. The Europe-wide arrest warrant against her had been issued by the prosecution office of Aachen, Germany, on the 24th of June 2015. In Germany she got locked up under the ‘U-haft‘ (Untersuchungshaft) regime in Cologne because of a presumed involvement in an armed bank robbery that had taken place two years earlier (2013). On the 2nd December 2015, after months of investigation the prosecution formally charged her with bank robbery, hostage taking and weapon possession. On the 16th of December, the court called the prison instructing them to release our comrade because all charges were to be dropped, since the “evidence” that months of investigation produced was not sufficient for this case to be brought to court.

When we were writing the above statement (1) concerning the imprisonment and release of our friend, we hoped it would be the last. Unfortunately the German cops did not agree, and decided to appeal against the decision of her release. This resulted in, after first being rejected by the normal court, the higher court’s decision to reopen the case. Concretely this means that, after having spent nearly six months in preventive prison, our friend and comrade is now outside awaiting trial. It is still unclear when the court case will take place. Despite several desperate attempts from the prosecutor’s office to also get a new warrant for her arrest – at the moment we are awaiting the high court’s decision of yet another appeal – she is still outside with us.

However, on Wednesday the 13th of April the same prosecutor’s office ordered a series of house raids in Barcelona that resulted in the arrest of another comrade; she is said to have participated in a bank robbery that was carried out in Aachen in 2014. It is clear that the German and Spanish authorities have decided to join forces in the ongoing project of repression against anarchists in the European territory, supported by the ever obedient dogs of the media.

As expected the media are rubbing their hands together, intertwining “common crimes” with anarchists. This does not come as a surprise, especially in a time that more and more is defined by repressive blows against anything subversive. However, we think it is important to leave the distinction between “common” or “political” crimes to the cops, the prosecutors, the journalists. We do not need to provide the authorities with categories they are only too willing too accept. As has been stated in the communiqué published by comrades of the person arrested in Barcelona, expropriation of banks is “an ethically just and politically legitimate practice, a method of struggle that forms part of the history of every revolutionary movement.” (2) Whether the accused individuals have participated in the robberies or not is not important to us. What is important is that we express our solidarity with those persecuted by the authorities.

While the servants of the State are spawning their assumptions and accusations into the world with a lot of spectacle, we should remember our own perspectives and ideas. These are not times for speculation, neither on the “motives” of the robberies, nor on the presumed innocence or guilt of the arrested. Rather than being a moment for questions, this should be a moment of answers – clear answers directed at those who oppress us. As has been said before, “you touch one of us, you touch all of us”. More than anything this is a time for solidarity, in every possible form it can take.

Freedom for the imprisoned comrade now

Until all prisons and the banks that need them are
destroyed 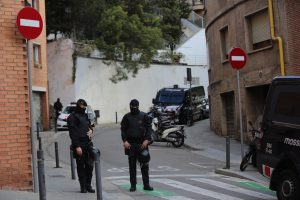 On Wednesday the 13th of April at five in the morning the Mossos d’Esquadra [Catalan autonomous police] began an operation in Barcelona in which they raided and searched two private addresses and one social centre in the neighbourhood of La Salut, “los Blokes Fantasma”, where the twenty inhabitants were held during twelve hours.

Besides the plundering and destruction that accompanies every police raid, the operation resulted in the arrest of a comrade who had already been imprisoned following Operation Pandora, and for whom there had been a European arrest warrant issued since the 11th of April based on the accusation of having participated in expropriations of banks in the German territory.

After passing in front of the Audiencia Nacional [Spanish special high court], judge Eloy Velasco sent our comrade to preventive arrest. She has been transferred to the prison of Soto del Real. Given that she is also facing charges in the Pandora process (currently in investigation phase) and that she has expressed the wish not be be extradited, our defence has requested a “condition” to the European extradition order, demanding that she will serve preventive arrest in Spain awaiting the court case that she has pending here. Within a period of maximum two months (extendible with one more month), the Audiencia Nacional will need to decide whether the handing over of our comrade to the German authorities will be temporarily suspended or not. From the news articles published in the German press we have learned that it concerns an expropriation that took place two years ago in the city of Aachen, during which – always according to the press – the group of assailants took a notable sum of money from the bank without causing any personal injuries or damage.

Whatever the outcome of the judicial process, we want to publicly show our support towards the comrade, vindicating as our own her revolutionary political goals, her struggle and her militant activity. Those who know her well know that she has truly deserved everyone’s solidarity. We are speaking of a person who is a fighter and an anarchist, who since years has been active in several anti-racist, feminist and libertarian projects in Barcelona, always in solidarity with the persecuted, always ready to help wherever she could, always ready to act, always generous, happy and smiling to those around her, always uncompromising and firm against everything that she perceives as unjust.

The attempt of the media to transform her into a public danger could not prove more perverse. Above all when this operation of mediatic manipulation implies presenting the banks as victims, in a total reversal of reality that dignifies those who have been robbing us, bleeding us dry, cheating us, dispossessing and cutting us down with impunity for years, while it criminalises those who rebel against its order and dare to attack it. We could not care less whether the comrade is actually responsible for the robberies or not. The expropriation of banks is an ethically just and politically legitimate practice, a method of struggle that forms part of the history of every revolutionary movement.

In fact, in spite of the constant attempts of Power to reduce this method in the scope of the “common crime”, motivated by personal interest and greed, what is certain is that the expropriation of places of accumulation of capital is constant in our history: from the anarchosyndicalist groups that at the beginning of the twentieth century robbed banks to maintain strikes or to help the families of the imprisoned comrades to the different autonomous groups of the ’70s and ’80s like the MIL, the OLLA or the Erate (formed by workers of the SEAT) that redirected the money accumulated by the rich to several projects of the exploited in struggle, to Maquis groups like those of Sabaté or Facerías that in the postwar period practised robberies in order to finance the resistance to the Francoist regime. Expropriation, both in its form as a tactical expression of a general political struggle and in the form of social banditism in which that what the banks are stealing from us is recuperated in order to free itself from the chains of exploitation of work and unemployment, to us does not seem something that is in principle reproachable – rather the contrary. That there are people that are sick of systematically being trampled under foot and exploited by the legal maffia confirms that “we are not commodities in the hands of the politicians and bankers” and that fortunately the human condition resists submissively accepting the dictatorship of capital over our lives.

The policial and mediatic hunt deployed because of the robberies in Germany should not let us forget our perspectives nor confuse us as to who are our enemies. The true public danger is power, represented by criminals such as Wolfgang Schäuble and Angela Merkel, the power that has not emptied a few heavy safes, but the social wealth of entire people and territories. It is the power of transnational elites that has pushed millions of people into misery in order to impose austerity measures that serve their neo-liberal and imperialist project. The arrest of our comrade is only another motive to fight these elites and the system they represent, a system only moved by the accumulation of money in the hands of a few at the expense of the suffering, dispossession and exploitation of everyone else. Neither the policial persecution nor the massive propaganda of the regime can hide what is already obvious to everyone, which is, as the poet said, what crime is robbing a bank compared to founding one?

Immediate freedom for the comrade imprisoned in Madrid!

Let’s stop the process of extradition! Solidarity with the social centre Blokes Fantasma and all the persecuted people in struggle!

While there is misery, there will be rebellion!

for the spreading of information, echoes of solidarity, rage and reflexions about the case of three anarchists accused of bank robbery by the prosecution of Aachen, Germany